The decision to leave the Paris Climate Agreement was not backed up in science. Trump didn’t try to argue against the science yesterday in his speech instead focusing on the economics of the matter. Differing economical outlooks are expected because we do not understand our economies as well as we understand our climate. This isn’t a knock on economists. We just understand the dynamics of the climate extremely well.

I want to present a few plots from the National Oceanic and Atmospheric Administration (NOAA) who have more data on this than anyone. These plots came from here if you’d like to explore yourself.

First, the much discussed CO2 in the air. It has increased by 25% in 60 years. Meanwhile, the suns energy output has remained very constant, even undergoing a ten year cycle that is well understood and explained by our stellar models.

One of the important questions is this: given the relationship of the data with our models of the greenhouse effect, if we continue emitting CO2 and other gases, what will happen? Here are three models that each assume a different rate of CO2 growth depending on how well we cut back. The bottom one in blue is close to what would happen if everyone stuck to the Paris Climate Agreement. In other words, we are still going to warm the planet more than we already have, even if we cut back. 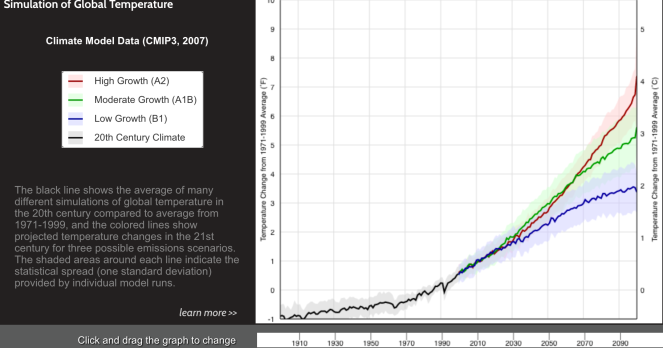 If everyone does what Donald Trump just decided we should do, we’d be in the red. Since the United States is such a high emitter (second most per year and among the highest per person in the world), the most likely scenario is in the green. We will beat the red model because of leadership of President Obama and other world leaders. Those world leaders are holding firm. Donald Trump is not.

I remain optimistic. I believe that the free market will continue to dictate no matter what Trump or any other politician does short of hugely changing the incentive game and/or actively penalizing green technologies. As long as research funding keeps flowing — this is not a sure bet under any  budget proposed by this president, but Congress already rebuffed Trump’s carry-over spending measure — the United States will continue to be a major player in the tech push. Solar and wind are already as efficient as coal — and even more efficient in sunny and windy places. Natural gas is cheaper and more efficient than coal today. Batteries are going to scale up rapidly and be able to store energy on extra sunny and windy days for the cloudy and calm days.

The trajectory we are on, with or without the agreement intact, is closer to the blue model above anyway. Humans can solve this. Humans are solving this. Everyone needs to continue to do their part, and everyone needs to pressure their representatives to act boldly against Trump’s ideas on this issue. If we do that, we may still be okay. That being said, it is impossible to overstate the wrongness of yesterday’s decision.

My name is Nathan Golovich. You can call me Nate. Welcome to my site. Here you will find an assortment of items from my blog to my research. Speaking of research, here is my CV.